by CraftyAmanda in Artwork, Cards, Close to My Heart, CTMH, Magnabilities, Pattern | Leave a comment 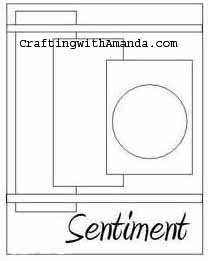 This is the sketch that I gave all the crafters at the Otsego Club Encore Weekend.  They were instructed to use it as inspiration  to create a card.  Other than that, there were no other guidelines.   Unfortunately I had camera/lighting issues and was unable to take photos of any of the cards that were entered, but as I had done a sample for people to see, I was able to retake it when I got home.  So, here is my take on the sketch. 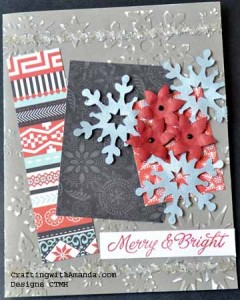 The snowflakes & poinsettias were left over from last year’s Christmas card.  The paper is Snowhaven   I used a snowflake embossing folder on my card base front and tilted the papers from the sketch. 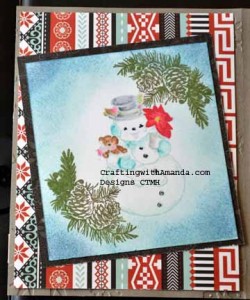 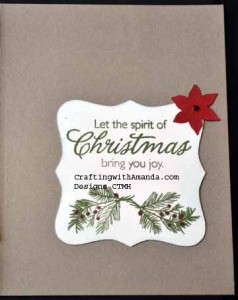 boughs from the  Yuletide Workshop on the Go.  I’m not sure how clear the photos show it, but I did rock and roll the boughs in New England Ivy & Cocoa for the pine cones.

The edges of the white cardstock were sponged in Glacier, Indian Corn Blue and Outdoor Denim.

On the right side, I kept it simpler with two pine boughs, colored the berries with our Shinhan Carmine marker.  To tie into the front of the card, I added another poinsettia.

I’m glad that I made this sample as it allowed some of the other crafters to think outside the lines and we had a tough time choosing the winner!

The winner received a magnabilities necklace and as she had already been to my booth and made purchases as Christmas gifts, she was happy to pick another necklace for herself.